What do the UK's Terror Threat Levels Mean?

Since 2006, the UK government has published terrorism threat assessments in the form of 'threat levels'.  Originally only one overall threat level was published, but from 24 September 2010, different threat levels for Northern Ireland, Great Britain (both NI-related and domestic) and from international terrorism have been released.  Some explanatory wording is provided, which explains that (for example) the current international terrorism threat level, 'severe', means that an attack is 'highly likely', while the current threat to Great Britain from domestic and NI-related terrorism, 'moderate', means an attack is 'possible but not likely'.

However, these descriptive wordings are not associated explicitly with any probabilities.  This makes it difficult to apply the threat levels to decision-making.  If we don't know whether, for example, 'highly likely' means '1 in 100 per day' or '1 in 10 per day' then we can't easily use the threat level information to decide whether boarding a plane or travelling to the centre of London with our family is worth the risk.  To be fair to JTAC and the Security Service (who compile the assessments), the threat level is not supposed to affect our behaviour.  The Security Service says that:

"Threat levels in themselves do not require specific responses from the public. They are a tool for security practitioners working across different sectors of what we call the Critical National Infrastructure opens in a new window (CNI) and the police to use in determining what protective security response may be required."

But can we use the published threat levels, along with data on terrorist attacks in Great Britain and Northern Ireland, to infer which probabilities the threat levels correspond to?  For example, the published GB threat level spent a total of 709 days at 'moderate' between first publication and the last published attack data at the end of 2013.  During those 709 days there were 16 attacks in Great Britain which were attributable to domestic or NI-related actors.  A best guess for the daily probability of an attack in this category is therefore about 1 in 44, or an attack somewhere in Great Britain roughly every six weeks.

But do we have enough information to make these kinds of inferences?  Well, we have enough information to make some inferences along these lines, because we do at least have some information.  It is very unlikely, for example, that a 'moderate' threat level corresponds to a daily probability of 1 in 1000, because then 16 attacks in just 709 days would be an extraordinarily high figure.  Likewise, the daily probability is not likely to be 1 in 10 - for then the observed number of attacks would be implausibly low.  This kind of reasoning - "if this were true, how likely are the data?" - is actually the engine of all probabilistic inference, and the probabilities it generates are called 'likelihoods'.  The likelihood associated with a hypothesis isn't the same as its probability, but it is a key component of its estimation using data.

Taking the example of non-international, GB-targeted terrorism, and using the data to estimate likelihood functions for the rates of terrorist attacks under a 'substantial' and a 'moderate' threat level (the only two levels that have applied to this category of attack), produces the following: 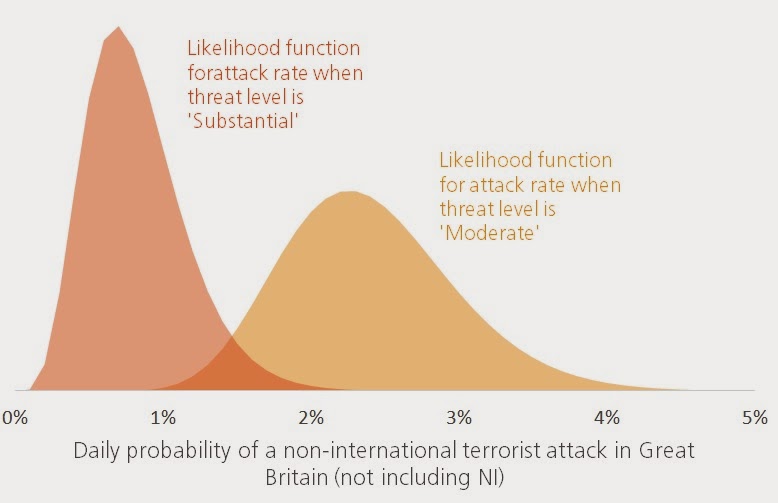 We can use this kind of approach to make tentative inferences about what probabilities of attacks the other threat levels correspond to.  Northern Ireland has had a threat level of 'severe' since the first publication; this is consistent with a daily attack probability of just less than 1-in-5.  Meanwhile, the international terrorism threat level of 'severe' corresponds to a substantially lower daily attack probability of somewhere between 1-in-1000 and 1-in-40 (the wider bounds here are due to the fact that there have been around 4 international terrorism incidents - depending on how they're classified - since 2010 compared with over 200 in Northern Ireland).  Meanwhile, the international terrorism threat level of 'substantial' probably corresponds to a daily attack probability of between 1-in-1000 and 1-in-100.

Taking the current threat levels into account, then, the daily probability of a terrorist attack is around 20% in Northern Ireland, around 1-4% in Great Britain from domestic or NI-related attacks, and around 0.1-1% from international terrorist attacks.