A Simple Rule for Decisions under Uncertainty

For decisions like these, it's helpful to know the 'critical probability' - the probability value above or below which your decision will differ.  There is a relatively easy way to derive this value, which doesn't require anything more than simple arithmetic.  The first step is to find two metrics which we can (for convenience) label 'cost' and 'risk'. 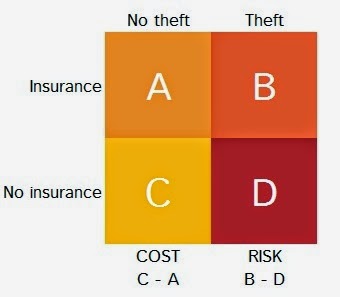 When you've calculated 'cost' and 'risk', the 'critical probability' is calculated as follows:

We can illustrate this by running with the example of insurance.  Suppose we have a £500 camera that we are taking on holiday and which we are wondering about insuring.  We are offered insurance that costs £20, with a £40 excess.  We put the outcomes into the grid as follows: 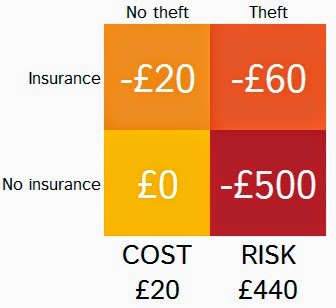 Incidentally, the labelling of the two metrics as 'cost' and 'risk', while convenient, is rather arbitrary and depends on the idea of there being a 'do nothing' baseline.  In general, thinking of one of your options as a 'baseline' can be harmful to good decision-making as it can stimulate biases such as the endowment effect.  It's best to think of the two things simply as values that help determine a decision.
Posted by Nick Hare at 06:54