The shootings in Ottawa on 22 October, which came only two days after a vehicle attack in Quebec, are an anomaly given the phenomenally low incidence of terrorism within Canada.  According to the Global Terrorism Database, only 8 people have been killed in terrorist attacks within Canada since 1970. The investigation is only just underway, but the attacks already seem to have some surprising features.  They are allegedly unconnected, at least in terms of any planning.  The terror threat level in Canada was raised to 'moderate' after the first attack, in response (the authorities say) to 'increased chatter' from radical groups, but the shooter on 22 October, Michael Zehaf-Bibeau, apparently has no direct connection to IS and AQ.  The details, when they emerge, will clearly hold lessons for intelligence analysts.

As in this case, terrorist threat levels often seem to change after an attack has happened.  This sometimes seems a bit like shutting the door after the horse has bolted.  But in fact, as the Canada incident illustrates, terrorist attacks really do come in clumps.  Canada's terrorist attacks are so infrequent that there is an average of about 230 days between them, since 1970.  A purely random process with this kind of interval would mean that only 3% of terrorist attacks would occur within the same week.  In Canada's case, though, nearly one in five terrorist attacks occurs within a week of the last one.  In other words, the rate of terrorist attacks rises by a factor of about six immediately following an attack.  A terrorist attack is therefore a relatively good indicator of another imminent attack - even disregarding any intelligence received - and the authorities almost certainly did the right thing in raising the threat level.

The effect is also clear in countries with relatively high levels of terrorism.  The chart below shows the observed frequency of intervals (in days) between attacks in Northern Ireland since 1970 (in blue) and the frequency that would be observed if attacks came purely randomly (in red). 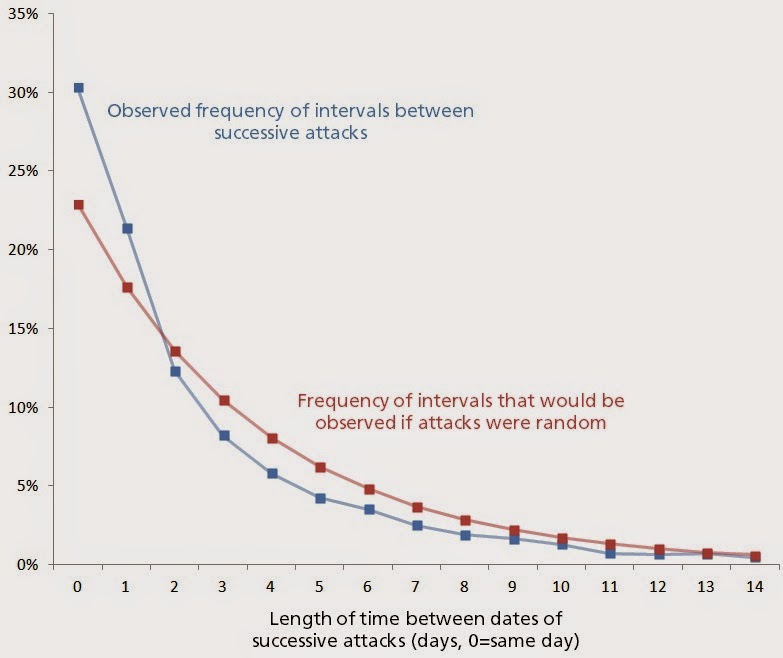 As the chart shows, attacks are more likely to occur immediately after another attack (whether through reprisals or co-ordinated activity), although the effect is smaller than that of Canada.  After about 2-3 days of peace the immediacy effect washes out and the daily frequency returns to the long-run average.
Posted by Nick Hare at 23:56